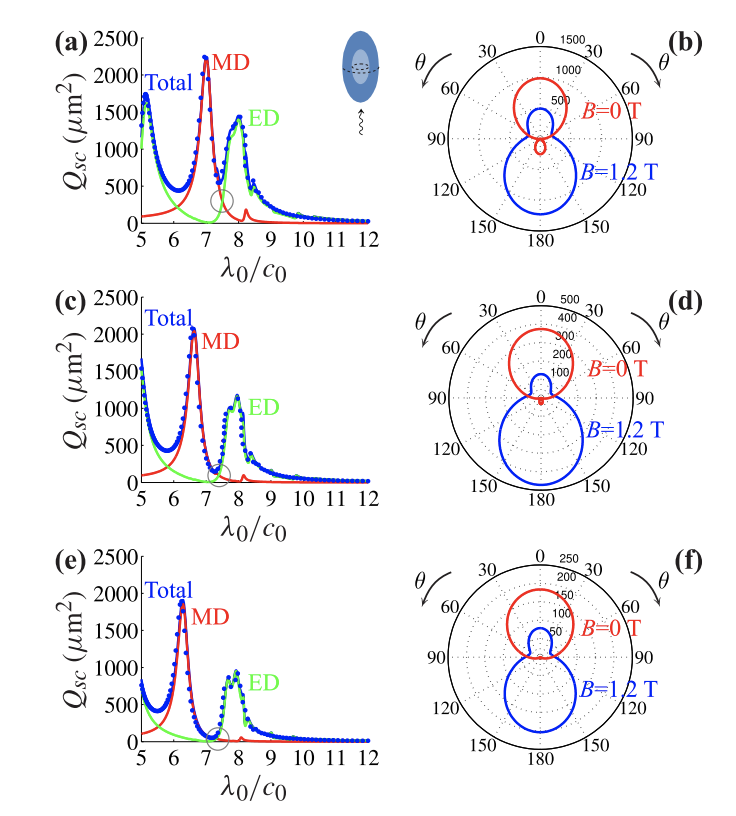 We employ the extended boundary condition method (EBCM) and construct a solution for the problem of electromagnetic (EM) scattering by anisotropic core-shell bodies of revolution (BoRs). In particular, two different core-shell configurations are examined: the gyroelectric-isotropic and the isotropic-gyroelectric setup. To construct the solution, we employ two groups of integral representations (IRs)—one group for each configuration solved—in conjunction with the discrete eigenfunction (DE) expansion of the fields in terms of spherical vector wave functions (SVWFs) for the gyroelectric regions. We demonstrate the validity and the computational performance of the method by comparisons with the HFSS commercial software for various core-shell setups such as spheroidal, cylindrical and combined spherical-cylindrical BoRs. We also employ ADDA, a particular version of the discrete dipole approximation (DDA) method, to trace the boundaries of validity of the EBCM. Finally, we present an application of the method to the study of magnetically-tunable spheroidal THz antennas. The method can be used in a variety of potential EM applications including microwaves, functional photonics structures, as well as nanoantenna engineering. 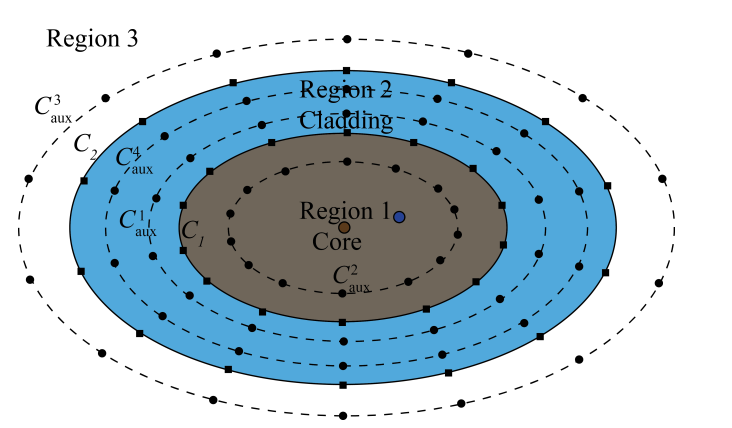 The Method of Auxiliary Sources with an Excitation Source (MAS-ES) has been successfully employed to compute the eigenvalues of arbitrarily-shaped hollow waveguides with perfectly electric conducting walls. The main advantages of this method are its simplicity, and that it is free of spurious eigenvalues, in contrast to the standard MAS approach. In this paper, we demonstrate that the MAS-ES is also effective in computing the propagation constants β of a cylindrical dielectric waveguide. It is emphasized that two excitation sources are required to excite hybrid modes of the dielectric waveguide. The modified method is named MAS with Two Excitation Sources (MAS-TES). The fact that the propagating modes are localized in the vicinity of the core allows us to determine the eigenvalues by measuring the response of the core to the excitation sources. This is performed by employing a response function F(β) which is maximized when a standing wave is formed in the core. Plotting F(β) for a dense set of β results in a response curve the peaks of which correspond to the waveguide’s eigenvalues. The method is tested for several dielectric waveguides’ geometries, including two multimode cases, and it is shown that it is free from discrete and continuous spurious solutions. All the MAS-TES results are compared with those obtained by a FEM-based commercial software and an excellent agreement is exhibited. 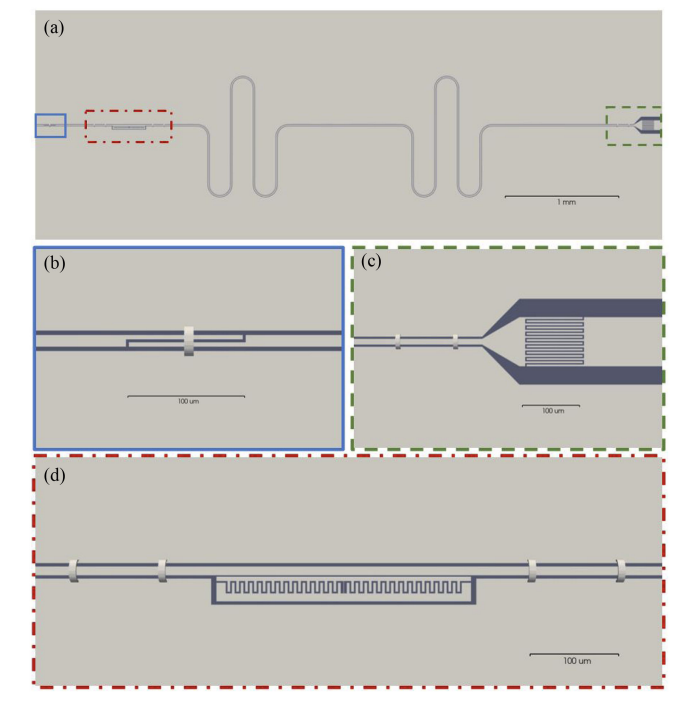 The spontaneous emission rate (SER) is an important figure of merit for any quantum bit (qubit), as it can play a significant role in the control and decoherence of the qubit. As a result, accurately characterizing the SER for practical devices is an important step in the design of quantum information processing devices. Here, we specifically focus on the experimentally popular platform of a transmon qubit, which is a kind of superconducting circuit qubit. Despite the importance of understanding the SER of these qubits, it is often determined using approximate circuit models or is inferred from measurements on a fabricated device. To improve the accuracy of predictions in the design process, it is better to use full-wave numerical methods that can make a minimal number of approximations in the description of practical systems. In this work, we show how this can be done with a recently developed field-based description of transmon qubits coupled to an electromagnetic environment. We validate our model by computing the SER for devices similar to those found in the literature that have been well-characterized experimentally. We further cross-validate our results by comparing them to simplified lumped element circuit and transmission line models as appropriate. 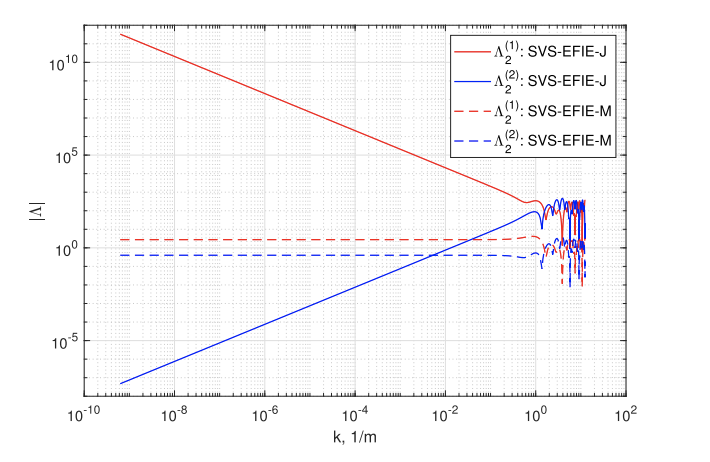 A novel magnetic current based Surface-Volume-Surface Electric Field Integral Equation (SVS-EFIE-M) is presented for the problem of scattering on homogeneous non-magnetic dielectric objects. The exact Galerkin Method of Moments (MoM) utilizing both the rotational and irrotational vector spherical harmonics as orthogonal basis and test functions according to the Helmholtz decomposition is implemented to solve SVS-EFIE-M analytically for the case of dielectric sphere excited by an electric dipole. The field throughout the sphere is evaluated and compared against the exact classical Mie series solution. The two are shown to agree to 12 digits of accuracy upon a sufficient number of basis/test functions taken in the MoM solution and the Mie series expansion. This exact solution validates the rigorous nature of the new SVS-EFIE-M formulation. It also reveals the spectral properties of its individual operators, their products and their linear combination. The spectrum of the MoM impedance matrix is also obtained. It is shown that upon choosing basis and test functions in L2(S) space and evaluating testing inner products in the same space, the MoM impedance matrix features bounded condition number with increasing order of discretization and/or at low frequencies. This makes the proposed SVS-EFIE-M formulation free of oversampling and low-frequency breakdowns giving it advantage both over its SVS-EFIE-J predecessor and classical double-source integral equations such as PMCHWT, Muller, and others suffering from this type of numerical instabilities inherent to their inferior spectral properties 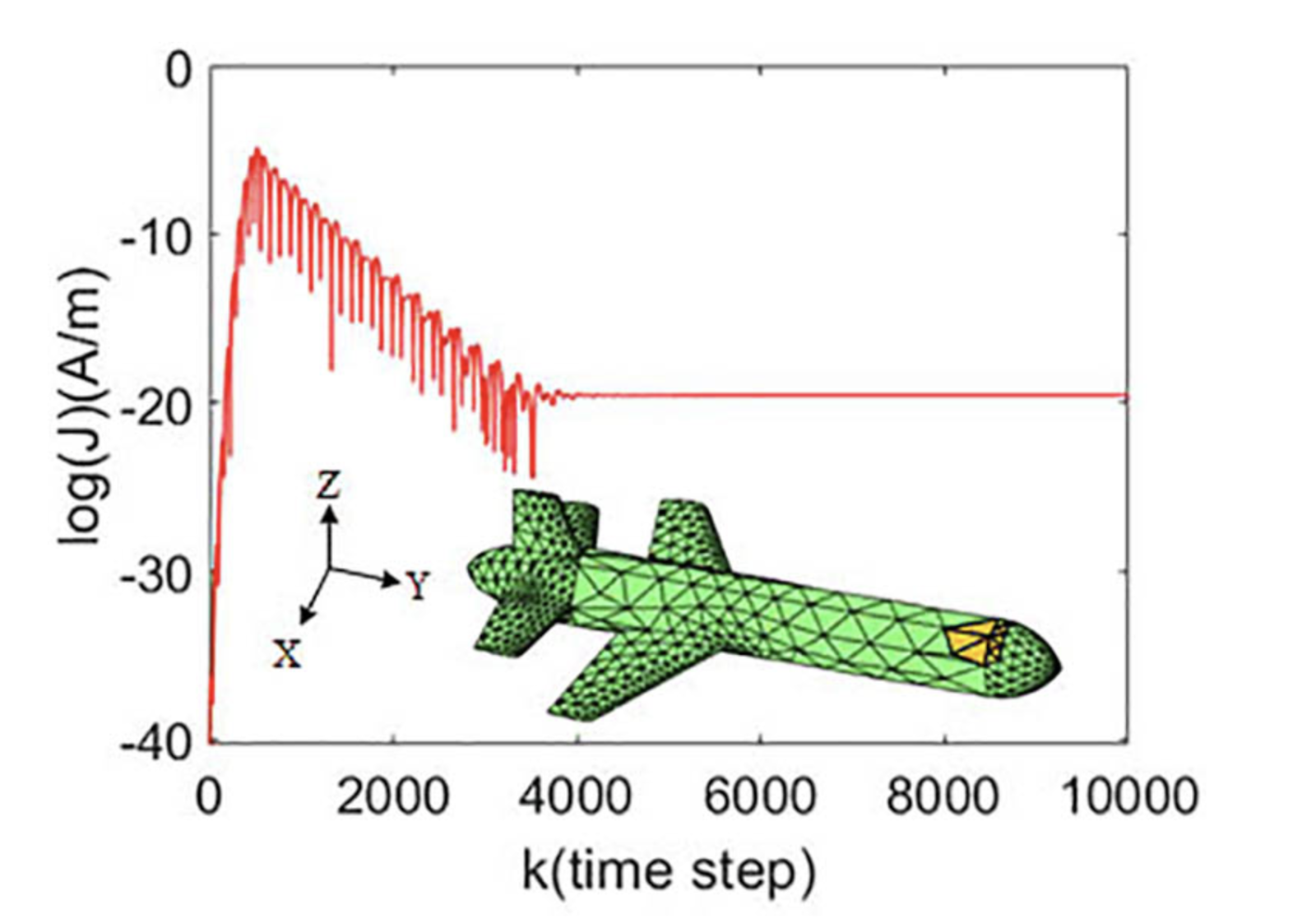 In this paper, novel loop-star basis functions with the multibranch Rao-Wilton-Glisson (MB-RWG) basis functions are applied to obtain the low-frequency stable solution of the time domain electric field integral equation (TD-EFIE). With the help of the MB-RWG basis functions, it is possible to realize the quasi-Helmholtz decomposition in the time domain between different regions that are discretized separately with nonconformal meshes, by modifying slightly the generation of the loop and star bases at the interfaces. Especially, the temporally differentiated form of the TD-EFIE is tested by the star basis, while the undifferentiated form of the TD-EFIE is tested by the loop basis. By means of the filtering technique, the components of the solution which have the potential of growing exponentially have been treated. Numerical results illustrate the accuracy and robustness of the proposed method in analyzing the transient scattering problems of perfectly electrical conducting (PEC) objects.

Conventional numerical heat conduction solvers are exceedingly computationally expensive and memory demanding. Recent advances in deep learning have witnessed its extensive application in computational physics field. Compared to traditional methods, deep learning framework emerges superior computational efficiency, providing a substitution for speeding up the calculation. In this paper, we propose an innovate deep learning framework to predict the 3D temperature field in a cubic region filled with random objects of various geometries and materials. The framework is capable of resolving both passive and active heat conduction problems. After being fully trained, it can achieve similar precision to the finite element method (FEM), while the calculation speed is accelerated by two orders of magnitude. Furthermore, the deep learning model has demonstrated robust generalization ability in predicting the temperature distribution of the cases with real-world objects not existing in the data set. We believe that the framework paves the way for solving complex heat conduction problems in engineering, as well as inverse problems in the future.

Nowadays, the demand for large-scale electromagnetic simulations has been generally increasing, and the FDTD method is one of the effective electromagnetic simulation methods. The MR (Multi-Region) / FDTD method allows the calculation of free space between the antenna and the objects to be omitted from the simulation model. This method utilizes the equivalence theorem to connect the multiple regions. One of the limitations of the MR/FDTD method is a high time complexity when it involves large-scale simulations. Thus, in this communication, we propose a space-time adaptive processing concept to optimize the computation time of the MR/FDTD method. In the proposed method, a quadtree structure is utilized for adaptive processing. We confirmed the effectiveness of the proposed method using numerical simulations.

Reverse-time migration (RTM) is considered to be one of the most accurate migration methods, especially for imaging geologically complex structures. Howeverthe conventional RTM using cross-correlation imaging condition is subject to strong migration artifacts. Recent researches on electromagnetic wavefield decomposition exhibit that the method can greatly suppresses the internal reflection noise, however, it is still subject to residual noise. To further eliminate the low-frequency noise to obtain high-resolution subsurface image, a novel electromagnetic imaging scheme by combining a Laplacian filtering with wavefield decomposition is presented, and the pseudospectral time-domain (PSTD) method is introduced to solve the time-dependent partial differential equations efficiently. In this work, we apply the Laplacian filtering on each wavefield snapshot in space domain to sharpen the field distribution. The filtered wavefields are further decomposed into downgoing and upgoing components for final imaging. Numerical experiments show that the proposed method balances the amplitudes of reflectors, and exhibits higher resolution compared to the conventional RTM.

Potential-based integral equations are being explored to develop numerical methods that avoid low-frequency breakdown issues so that they can analyze multiscale structures that are becoming increasingly important in electromagnetic engineering. This work continues the development of potential-based time domain integral equations by presenting three new formulations in the Lorenz gauge that do not support interior resonances. These modifications allow the methods to be applied to deeply multiscale structures of practical importance that contain significantly subwavelength- and wavelength-sized geometric features. Appropriate marching-on-in-time discretization schemes are developed for each formulation that fully conform to the temporal Sobolev space properties of the integral equations. It is shown that following this approach leads to a discrete system with improved stability properties. Further, it is demonstrated that this new system can produce accurate results over broad bandwidths and analyze deeply multiscale systems that previous potential-based time domain integral equations could not.

J-MMCT has been selected for inclusion in the Web of Science. Articles published after January 1, 2016, will be included in the Emerging Sources Citation Index. Details of the Web of Science Editorial Selection Process can be found here.

A call for papers for our annual special section on the 2020 IEEE International Conference on Computational Electromagnetics (ICCEM 2020) is available. Expected online publication date is December 2020.

I am profoundly honoured by and excited for the opportunity to serve as the Editor-in-Chief of the IEEE J. on Multiscale and Multiphysics Computational Techniques for the next three years.

This journal is very young, but highly aspiring; its objective is to report significant new developments in the theory and applications of computational techniques for problems of interest across its three founding IEEE societies, the Antennas and Propagation, Electromagnetic Compatibility and Microwave Theory and Techniques Society, and beyond: to researchers and practitioners in other areas of science and engineering, working on subjects related to electromagnetic fields.

Many new areas of research in natural sciences and engineering evolve on and across rather than within conventional disciplinary boundaries. Research on computational electromagnetics methods will be likewise advancing on these boundaries, coupling Maxwell’s equations with mechanical, thermal, chemical and quantum phenomena solvers. Moreover, translating our detailed knowledge of component parts to their impact on the behavior of the systems they belong to, defines the frontier of multiscale modeling, where potentially heterogeneous models are integrated over the wide range of spatial and temporal scales present in most physical problems.

This journal is committed to keeping up with these advances, becoming the main source of reference for the latest, high impact research on multiscale and multiphysics computations of electromagnetic fields. We will do so through our regular papers, but also with invited papers and special issues on emerging areas of computational techniques. Our journal will also solicit and welcome contributions from researchers in any area of computational science and engineering on techniques that have potential applications in electromagnetics.

Founded by three IEEE societies, this Journal ultimately belongs to you: its readers. The Associate Editors and I welcome your thoughts and suggestions on the future of the Journal. For all of us, J-MMCT’s journey continues, with a sense of optimism and responsibility.